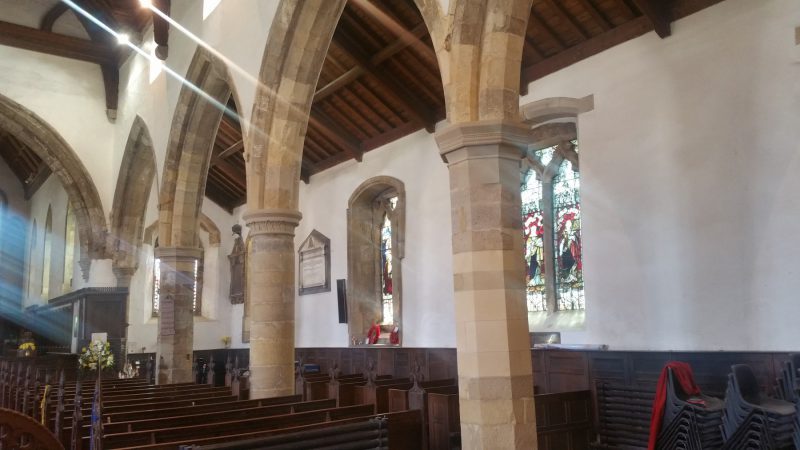 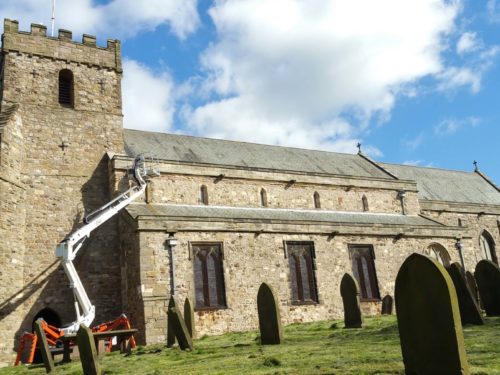 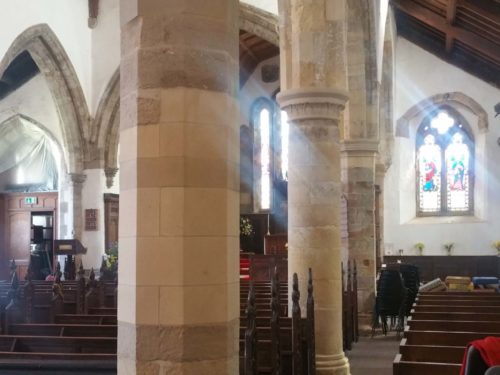 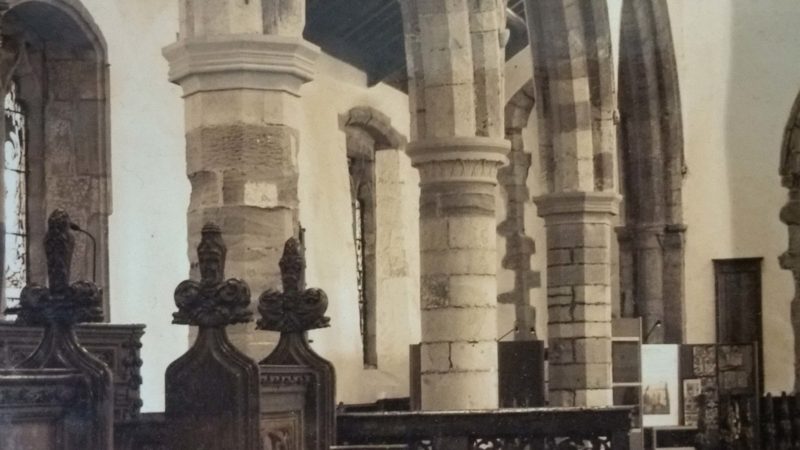 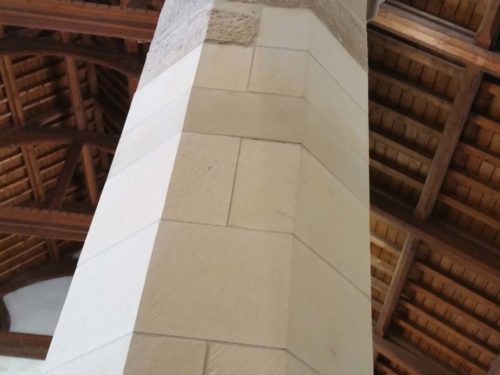 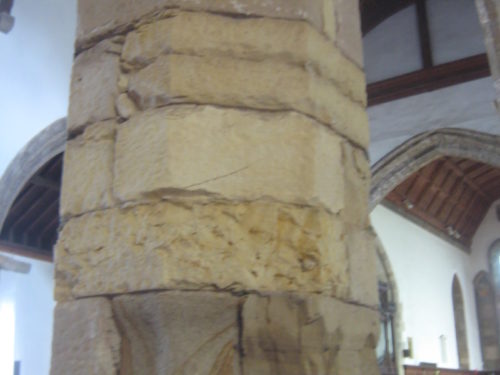 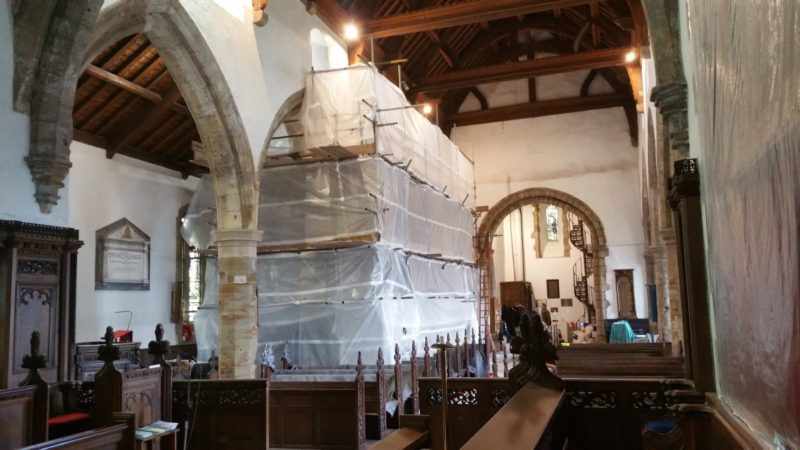 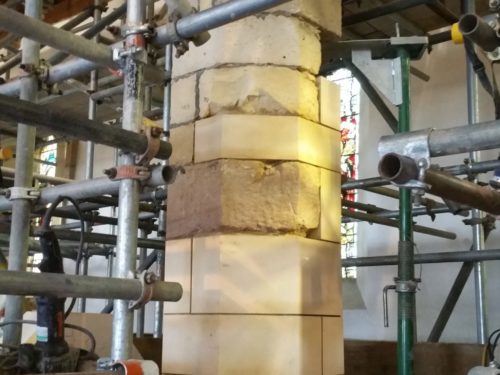 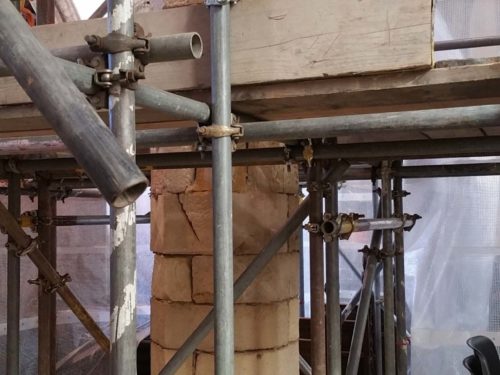 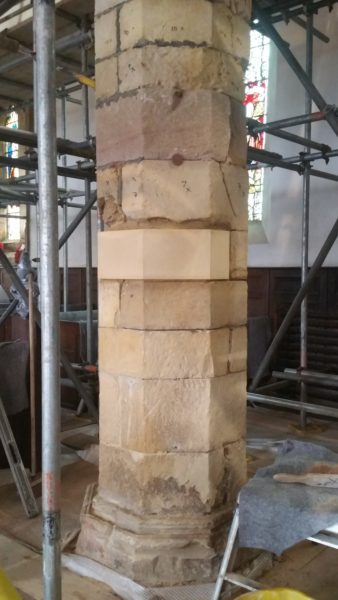 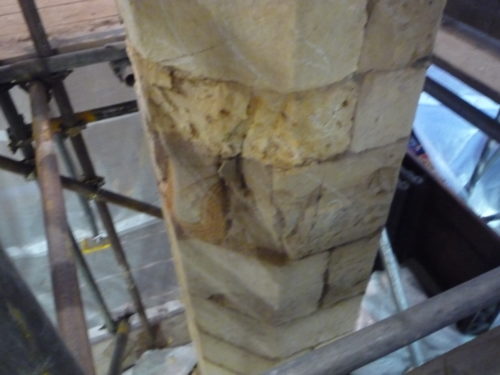 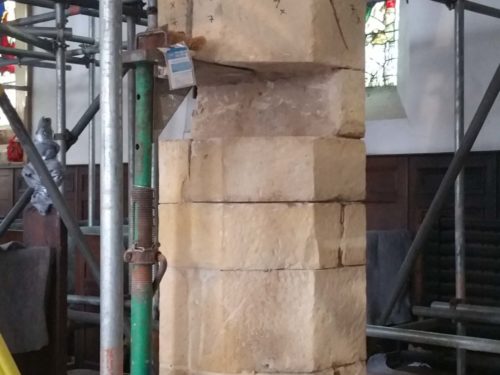 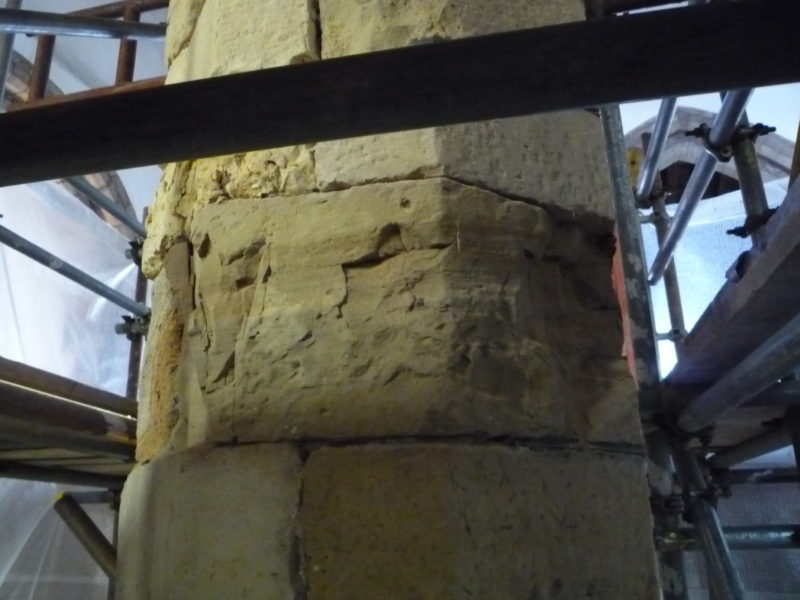 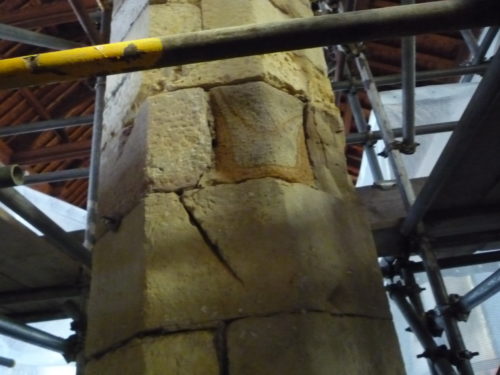 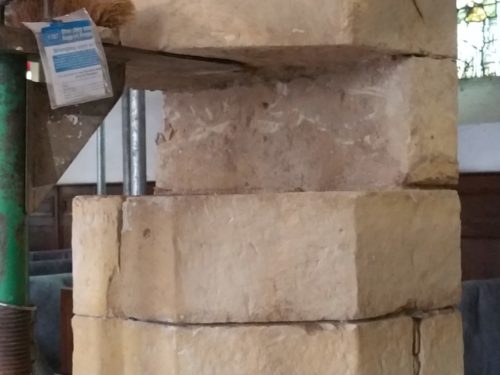 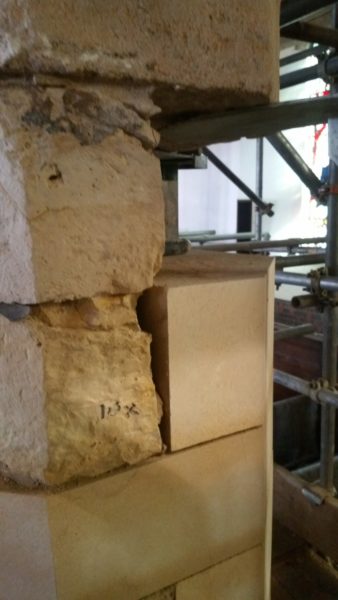 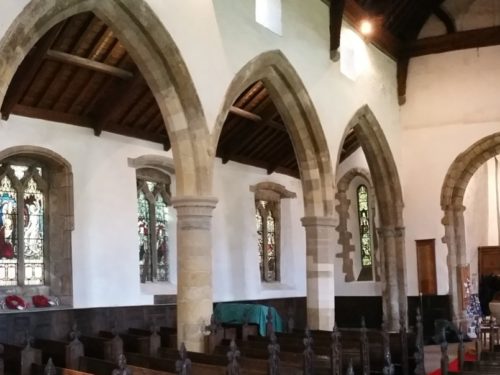 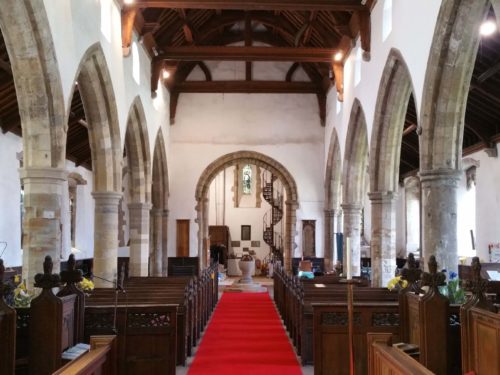 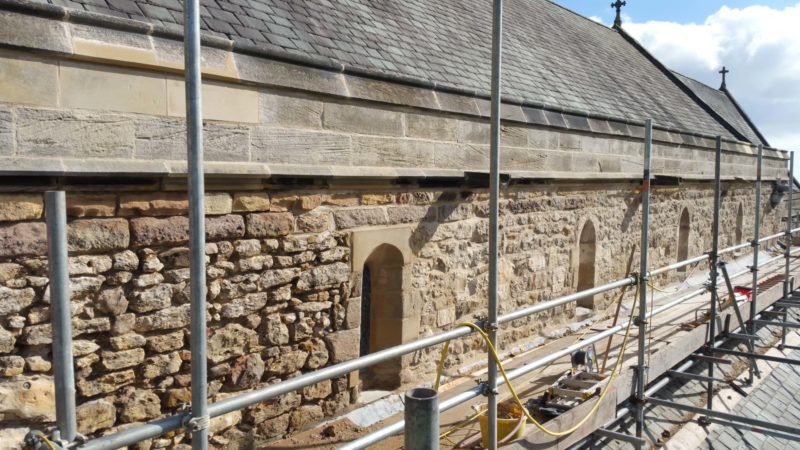 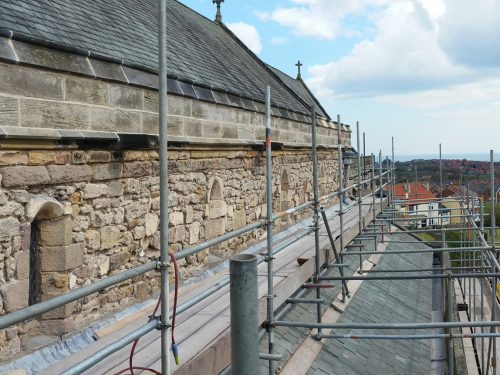 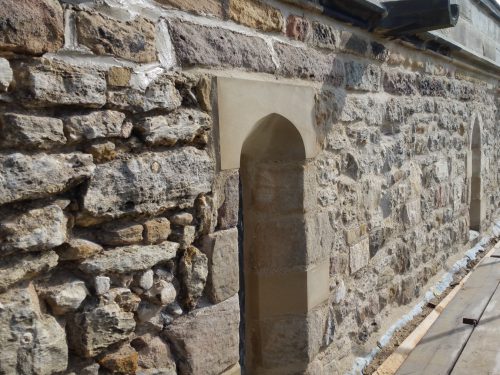 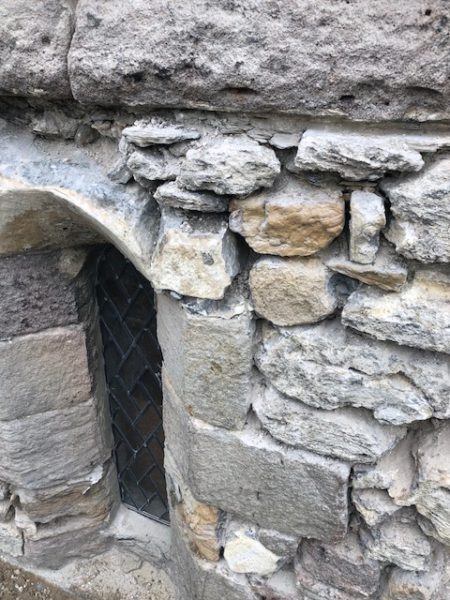 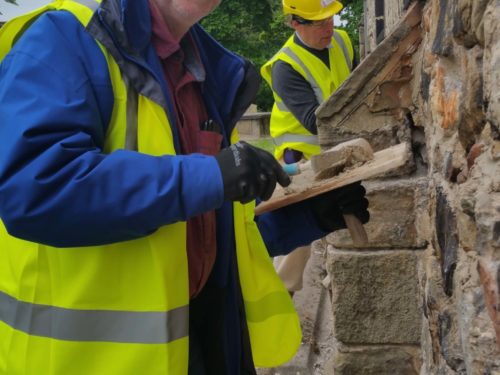 The church of Easington, St Mary has been in the village since pre conquest times. It has seen many changes in its construction but it settled down to the shape we know today in the 14th century. It is a very old and venerable building with Saxon sculpture and fine furnishings. There have been major repairs up at roof level in the previous decades as the aisles have moved.

In 2015 decayed stonework in one column was creating anxiety and fear of collapse. It had temporary scaffold put up whilst the repair works were planned out and funding sought from the HLF.   The repairs were completed this year and the people of Easington Village have finally ‘got their church back’ but how they did is an interesting story.

There are always a lot of people involved in church repair projects. We have had: the Rector, the PCC, the treasurer, the churchwarden. The building professionals of: architect, archaeologist, geologist, structural engineer. The construction people of: scaffolders, masons, apprentices, supervisor, contract manager, drainage surveyors and, because of a break in, glass restorers. And Historic England and the Diocesan Advisory Committee who assessed the repairs and the Chancellor who provided approval. So there are a lot of people to make happy.

And we hadn’t even started the repair work.

There were two principle activities in getting the column repaired: finding the stone and putting column stone replacements back.

The church is on the magnesian limestone plateau and is mostly made of this but there are some sandstones built in (they do not like each other- they react to each other’s presence when wet- the limestone wins). The columns look like sandstone but our geologist tested them in the lab and were proved to be magnesian limestone. There isn’t any local magnesian limestone. Apart from the disused Hawthorn Quarry close by. We obtained permission form Tarmac who owned the closed quarry, opened it up and extracted some stone, cut it into suitable sizes to examine it to find it was unsuitable for the column but we did use it for the clerestory repairs. Anticipating Hawthorn might not be right we had a second stone in reserve. This was rejected by our geologist. Finally we used the same stone as York Minster from Tadcaster.

New scaffold replaced the temporary. We intended to take down the whole column, supporting the arcade at the capital and build it back up, but there was a risk of settlement of the scaffold because of possible burials under the floor. So they were taken out one by one. And put back one by one. There were no cramps or mason marks but the new work had masons marks added. The final question was the finish to the stone. It comes sawn but the blade marks are unacceptable and that’s why it’s polished, except that’s too smooth. So a pneumatic chisel was employed to rough it up a little so it better matches its neighbours.

Throughout the work the contractor, Classic Masonry  payed diligent attention to the project and there is no doubt that the finished work is down to the skill and attention of the lead mason, Paul Robson and his team. They also carried out a training day for volunteers to have a go at lime pointing and stone carving skills.